A couple of days ago, The Hill published an article called “Vegan diet best for planet.”

The Dietary Guidelines Advisory Committee, a federally appointed panel of nutritionists created in 1983, decided for the first time this year to factor in environmental sustainability in its recommendations. They include a finding that a diet lower in animal-based foods is not only healthier, but has less of an environmental impact.

The meat industry is lashing back, contending the panel has neither the authority nor the expertise to make such a judgment.

Hard to say whether this one will have a happy ending. The article does say:

The Agriculture Department and Department of Health and Human Services will use the committee’s report and recommendations to draft the final guidelines for 2015, due out later this year.

But it follows up with this:

But even Agriculture Secretary Tom Vilsack has said sustainability is an issue that falls outside the scope of the guidelines.

Still, how cool is it to read this line in an article about federal dietary recommendations?

In its review of scientific studies, the committee highlighted research concluding that a vegan diet had the most potential health benefits.

1. Watch/read the Democracy Now interview with creators of Cowspiracy. This is the best overall analysis of the role animal ag plays in California’s water shortage.

Fracking gets a lot of attention because of water use. Fracking uses about 100 billion gallons of water every year in the U.S., which is a tremendous amount of water, but animal agriculture uses in excess of 34 trillion gallons. So it’s magnitudes greater. And then again the emissions that come from animal agriculture are about equal to natural gas and petroleum production. So it’s an issue that is vastly more destructive when it comes to water consumption, water pollution, and even emissions.

Ten percent of all water in California is used for almonds, which is a tremendous amount of water. But again, just alfalfa alone, a crop that is not consumed by human beings, that is fed for livestock, consumes 15 percent. California produces 82 percent of the world’s entire almonds. This is — again 10 percent of California’s water is feeding the 82 percent of the world’s almond demands. And the other important fact is that Americans aren’t consuming, and Californians in particular, aren’t consuming nine ounces of almonds per day, which is not the case for animal agriculture. Animal products we’re consuming nine ounces per person per day in the United States.

Lots and lots of statistics. I encourage you to check out the whole thing!

2. LA times has a great infographic showing the amount of water used to produce different foods. 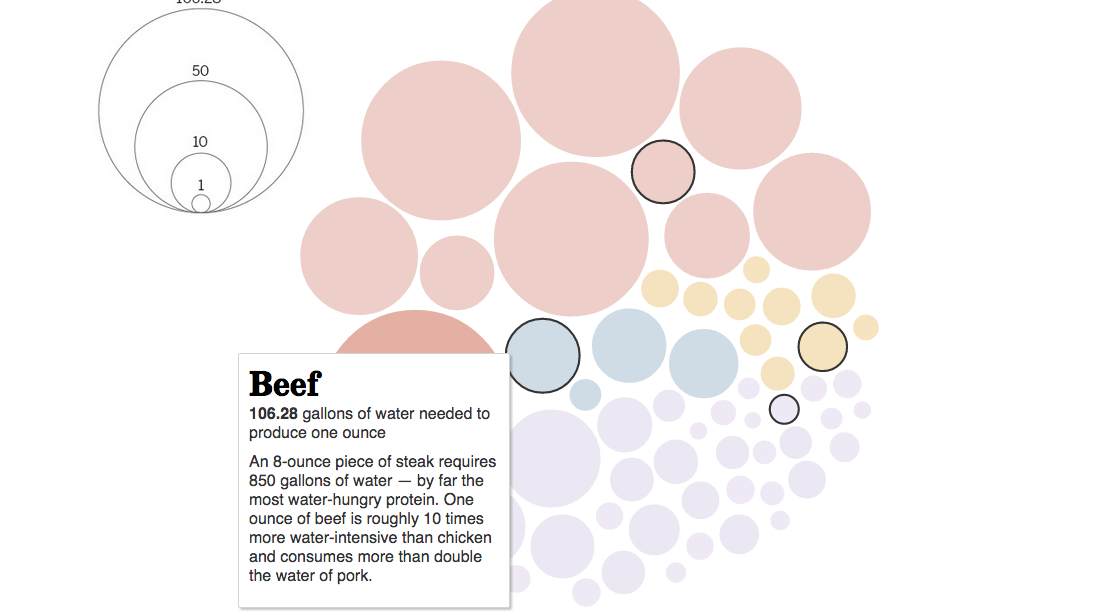 AND, what’s even cooler, they have an interactive graphic where you can create a virtual plate and see how much your water footprint is!

3. A Mother Jones article from last year shows the amount of water that goes into producing different dairy products.

5. Truth or Drought has a change.org petition to Save Our Water to include animal agriculture. Another great summary of facts, including the following:

Making a meal with lentils instead of beef can save a family of four the equivalent of 17 bathtubs full of water, per Oxfam International.

Skipping one single hamburger saves 660 gallons of water (LA Times). (Comparatively, the popular tip of shaving a minute off your shower saves about 2 gallons of water.) This means that 6 hamburgers equal an entire year of showers!

Skip the New York Times article that only gives glancing attention to agriculture, and no mention of animal agriculture specifically:

But even a significant drop in residential water use will not move the consumption needle nearly as much as even a small reduction by farmers. Of all the surface water consumed in the state, roughly 80 percent is earmarked for the agricultural sector.

“The big question is agriculture, and there are difficult trade-offs that need to be made,” said Katrina Jessoe, assistant professor of agricultural and resource economics at the University of California, Davis.

Thank you Cheryl Breuer for this informative and mouth watering article on Madison’s vegan goodies.

When vegan chef Chloe Coscarelli won Cupcake Wars on Food Network last year, I did a fist pump of victory for fellow vegans everywhere. The judges marveled at Coscarelli’s moist, delicious creations baked without eggs or butter and frosted without cream cheese, validating on national television what many vegans already know. Done well, vegan cakes, pies and desserts are every bit as complex and flavorful as their non-vegan counterparts.

Fortunately for Isthmus readers with a vegan sweet tooth, there are a growing number of choices available in the Madison area. Here are some of my favorites. Read the entire article here:

No matter what one calls it, this lifestyle can save your life, not to mention the lives of thousands of animals. Set aside 50 minutes to watch this excellent look into Pres. Bill Clinton’s amazing life turnaround since he embraced a plant based, vegan diet.

In this hour-long CNN documentary, Sanjay Gupta investigates whether diet and the latest diagnostic tests are enough to prevent every heart attack. During the medical journey of discovery, Dr. Gupta talks to former President Clinton, cutting edge doctors and puts his own heart under the microscope as he offers practical advice and hard science to shows how we could have…The Last Heart Attack.

Who would have thought that in the land of cheese and brats you would find a thriving vegan community?

The Vegan Milwaukee site is here to help you whether you’re a visiting vegan from out of town, a new vegan looking to find out where to eat, or a long-time vegan who wants to connect with other like-minded people and continue to expand your horizons.

We’re here to serve you, so please feel free to send in your suggestions and ideas to help us provide the kind of information you need.

So…relax, take a look around, tell your friends and share your ideas. We want you to feel right at home!

Vegan Milwaukee – Your Resource for Everything Vegan in Milwaukee.

I don’t eat lamb…You feel guilty. It just feels kind of like…they are very gentle. Well, cows are [gentle, too, but] we eat them. I don’t know how to describe it….It seems like everybody eats cow. It’s affordable and there are so many of them but lambs are just different….Seems like it’s okay to eat a cow but it’s not okay to eat a lamb…the difference is weird.

I don’t [think of animals raised for meat as individuals]. I wouldn’t be able to do my job if I got that personal with them. When you say “individuals,” you mean as a unique person, as a unique thing with its own name and its own characteristics, its own little games it plays? Yeah? Yeah, I’d really rather not know that. I’m sure it has it, but I’d rather not know it.

Consider the above statements. A meat cutter wouldn’t be able to carry on with his work if he thought about what he was doing. A meat eater is affectionate toward one species but eats another and has no idea why. Before being asked to reflect on their behaviors, neither of these individuals thought there was anything odd about the way they relate to the animals that become their food, and after such reflection their awareness quickly “wore off.” So the meat cutter kept the unpleasant reality of his job at bay and continued to process animals, while the meat eater suppressed his mental paradox and continued to eat them.

Melanie Joy, Ph.D., Ed.M. will be the guest speaker at Alliance for Animals’ Vegantines Dinner on February 11, 2012.

She is the author of the acclaimed Why We Love Dogs, Eat Pigs, and Wear Cows: An Introduction to Carnism. Dr. Joy is a Harvard-educated psychologist, personal/relationship coach, professor of psychology and sociology at the University of Massachusetts, Boston, and celebrated speaker.

Thank you Gina S. for recommending this article.

And the Mayo Clinic’s Nelson said even being vegan doesn’t increase that risk.

“We know that those individuals who avoid milk and animal products that contain calcium do just fine in terms of their growth, their development, and their bone health,” she said.

Nelson said that’s because vegan diets can be rich in other foods that are good calcium sources.

“The profile of the vegan diet also helps you conserve calcium,” she added. “The person who eats a lot of meat or a high animal-protein diet has a tendency to lose more calcium … it’s a metabolic process that’s quite complex.”

You can learn more about the events and food options available and totally Vegan at the Alliance for Animals website, http://www.allanimals.org.

The first and only legitimate use for a cow’s milk is to feed her calf.

Every other use that follows was forced on us by tradition, habit, marketing, questionable science, political pressure or any of those in varying combinations that arrived glass by fat-lined glass when we were defenseless children.

It’s time to throw them off and move on to a diet that excludes many of the dairy choices we’re making.

The recent, annual World Dairy Expo at the Alliant Energy Center in Madison was a fascinating spectacle. All that effort bent at balancing the weight of a cow’s daily milk production with her daily manure production. Despite that, one irrefutable fact remains: The first and the only legitimate use for a cow’s milk is to feed her calf.

Karl Garson: A calf needs a cow’s milk, but you don’t.