WASHINGTON—The Institute of Medicine today released a report that finds that chimpanzee experiments are not needed to develop an HIV vaccine, hepatitis C antiviral drugs, or treatments for a wide range of other human illnesses. The report underscores the need to end chimpanzee experimentation in the United States, the last nation on earth still conducting large-scale experiments on humankind’s closest genetic relatives.

Experts from the nonprofit Physicians Committee for Responsible Medicine (PCRM) testified before the IOM during the seven-month report process, providing evidence on the scientific and ethical problems of chimpanzee use in invasive experiments.

The report, written by a panel of scientific and medical experts convened by the IOM on behalf of the National Academy of Sciences, says that most current use of chimpanzees for biomedical research is unnecessary. Regarding hepatitis C research, for example, the report says, “The committee finds that chimpanzees are not necessary for HCV antiviral drug discovery and development and does not foresee the future necessity of the chimpanzee model in this area.” Read full article here: 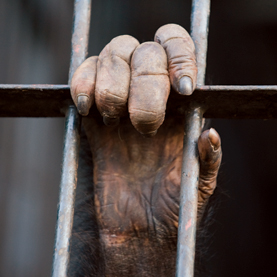 The testing began shortly after Bobby’s first birthday. By the time he was 19 he had been anesthetized more than 250 times and undergone innumerable biopsies in the name of science. Much of the time he lived alone in a cramped, barren cage. Bobby grew depressed and emaciated and began biting his own arm, leaving permanent scars.

Bobby is a chimpanzee. Born in captivity to parents who were also lab chimps, he grew up at the Coulston Foundation, a biomedical research facility in Alamogordo, N.M., that was cited for repeated violations of the Animal Welfare Act before it was shuttered in 2002. He is one of the lucky ones. Today he lives in a sanctuary called Save the Chimps in Fort Pierce, Fla., where he can socialize and roam freely. Last year the National Institutes of Health announced plans to put some 180 ex-Coulston chimps currently housed at the Alamogordo Primate Facility back in service, to rejoin the roughly 800 other chimps that serve as subjects for studies of human diseases, therapies and vaccines in the U.S., which is the only country apart from Gabon to maintain chimps for this purpose.

Public opposition is on the rise. In April a bipartisan group of senators introduced a bill, the Great Ape Protection and Cost Savings Act, to prohibit invasive research on great apes, including chimps. And when the NIH announced its plans for bringing the Alamogordo chimps out of retirement, objections from the Humane Society, primatologist Jane Goodall​ and others prompted the agency to put the plans on hold until the Institute of Medicine (IOM) completes a study of whether chimps are truly necessary for biomedical and behavioral research. The IOM project itself has been criticized: the NIH instructed it to omit ethics from consideration.

In April, McClatchy Newspapers​ ran a special report based on its review of thousands of medical records detailing research on chimps like Bobby. The stories painted a grim picture of life in the lab, noting disturbing psychological responses in the chimps. Then, in June, Hope R. Ferdowsian of George Washington University and her colleagues reported in PLoS ONE that chimps that had previously suffered traumatic events, including experimentation, exhibit clusters of symptoms similar to depression and post-traumatic stress disorder in humans.

That chimps and humans react to trauma in a like manner should not come as a surprise. Chimps are our closest living relatives and share a capacity for emotion, including fear, anxiety, grief and rage.

Testing on chimps has been a huge boon for humans in the past, contributing to the discovery of hepatitis C and vaccines against polio and hepatitis B, among other advances. Whether it will continue to bear fruit is less certain. Alternatives are emerging, including ones that rely on computer modeling and isolated cells. In 2008 pharmaceutical manufacturer Gla­xo­Smith­Kline announced it would end its use of chimps.

In our view, the time has come to end biomedical experimentation on chimpanzees. The Senate bill would phase out invasive research on chimps over a three-year period, giving the researchers time to implement alternatives, after which the animals would be retired to sanctuaries.

We accept that others may make a different moral trade-off. If the U.S. elects to continue testing on chimps, however, then it needs to adopt stricter guidelines. Chimps should be used only in studies of major diseases and only when there is no other option. Highly social by nature, they should live with other chimps and in a stimulating environment with room to move around. And when a test inflicts pain or psychological distress, they should have access to treatment that eases those afflictions.

The Animal Welfare Act affords chimps some protection. But clearly more is needed. To develop and enforce tighter regulations, the U.S. Department of Agriculture, which enforces the Animal Welfare Act, should establish an ethics committee specifically for biomedical research on chimps. The committee would need to include not just medical researchers but also bioethicists and representatives from animal welfare groups. Such measures would no doubt make medical testing on chimps even more expensive than it already is. Yet if human lives are going to benefit from research on our primate cousins, it is incumbent on us to minimize their suffering, provide them with an acceptable quality of life—and develop techniques that hasten the day when all of Bobby’s fellow chimps can join him in retirement.

If you live in Wisconsin, visit our Great Ape page: What you can do.