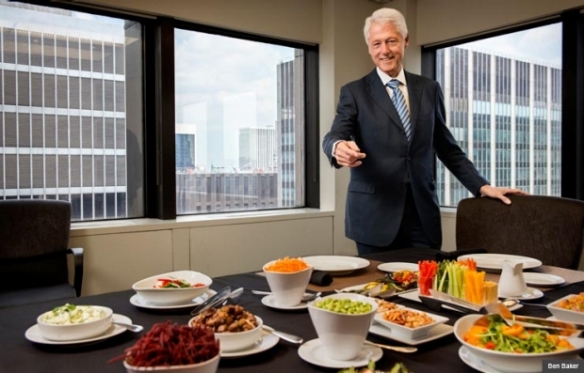 When Bill Clinton invited me to lunch in May, I knew better than to expect fried catfish or barbecued ribs. The former president is now a devoted vegan, meaning no meat, fish or dairy products, and he has pursued a healthier way of life for more than three years. While I figured our lunch menu might be bland, that would be a small price to pay for private time with a world leader who is anything but.

As it happens, the fit, trim and sharply attired Clinton, whom I’ve come to know well during more than two decades covering his career, is his usual gregarious, charismatic self. But a bland menu? Not even close.

Get Ready, Get Set — Go Vegan!

The luncheon banquet gives a whole new meaning to the dreaded cliché “Eat your vegetables.” And this is exactly what Clinton, who is taking on America’s obesity epidemic with the same passionate commitment he brought to the presidency, wants.

As I gawk, he smiles. “This looks pretty good, doesn’t it?” Clinton asks. It looks better than good. We sit down and with great relish start passing plates back and forth. He favored the quinoa; I loved the roasted cauliflower and snow peas; and we both liked the beans.

The road to a healthier diet

At age 66, Bill Clinton still travels and works at a pace that completely exhausts staffers who are two or three decades younger. Yet, while coping with heart disease and the usual complaints of aging, he has managed to change his diet drastically, lose more than 30 pounds and keep the weight off. If he can do all that, then maybe there’s hope for the rest of us baby boomers — and Americans of all ages — whose eating and exercise habits (and medical expenses) worry him a lot.

I first noticed a change in Clinton’s eating habits when we were in Capetown, South Africa, back in July 2010. (I have been covering his extraordinary postpresidential career since 2005, interviewing him frequently and traveling with him across Africa, Europe and the Mideast, as well as the United States.) We were all preparing to dig into a tempting dinner sent up to the former president’s suite from a very fine restaurant in the hotel. Sitting down next to him, I glanced at his plate and saw none of the steak, shrimp, fish or chicken on the buffet — just a tangle of green lo mein noodles and a pile of broccoli.

“Is that all you’re eating?” I blurted.

“That’s right,” he replied. “I’ve stopped eating meat, cheese, milk, even fish. No dairy at all.” He smiled and yanked on his waistband. “I’ve lost more than 20 pounds so far, aiming for about 30 before Chelsea’s wedding. And I have so much more energy now! I feel great.” (He achieved his ideal weight in time for his daughter’s marriage to Marc Mezvinsky on July 31, 2010.) Read more here:

Bill Clinton Reveals How He Became a Vegan – AARP.

A recent Associated Press article about Washington farmer John Bartheld, who breeds miniature and full-sized cows, ended with Bartheld saying since he doesn’t have kids “these things are kind of like my children,” referring to his cows.

I often hear livestock farmers say similar things about the animals they breed, raise and even sell for slaughter. There is nothing remotely family-like about raising an animal, no matter how much affection one has for it during the process, then shipping it off to be slaughtered for food.

Many people are becoming more aware of the suffering behind the production of meat and dairy products and are embracing a vegan lifestyle.

Not only is it better for the animals, it has a positive impact on one’s health and our environment. Visit madisonvegan.com for local restaurants that offer delicious and healthful vegan options. Give one of them a try.

Lynn Pauly: Try a vegan lifestyle for a positive impact on the environment : Wsj.

Dear Editor: Regarding Rick Bogle and Zorba Paster’s Opinion and Commentary on the Dalai Lama, I would like to point out that meditation has another prominent spokesperson as well. Thich Nhat Hanh, a Vietnamese Buddhist monk, peace activist and author who was nominated for the Nobel Peace Prize by Martin Luther King Jr., is best known for teaching mindfulness meditation. An ethical vegan, Hanh has said, “Buddhist practitioners have practiced vegetarianism over the last 2,000 years with the intention to nourish our compassion towards the animals. Compassion is our most important practice. Understanding brings compassion. Understanding the suffering that living beings undergo helps liberate the energy of compassion. And with that energy you know what to do.”

The concept and practice of nonviolence are central to Buddhism, and mean not causing pain to any being by thoughts, words or actions. Perfection is neither possible nor the point. The essential practice of nonviolence is veganism, minimizing harm to the environment and to all beings affected by humans’ choices. This includes the millions of animals who are hurting, suffering and dying needlessly.

As a longtime meditator, I try to practice nonviolence: I am determined not to support any act of killing in the world. As for the Dalai Lama, I hope that eventually, like Thich Nhat Hanh, he will “know what to do,” and find the understanding to take the basic Buddhist precept of compassion off his meditation cushion and onto his dinner plate.

Located on Library Mall every Wednesday through Friday
from 10AM until 2pm and
Capitol Square Farmer’s Market on Saturdays from 8AM until 2pm.

Side salad (choice of vinaigrette or ranch)(GF)$4.00

In 2011, a cohort of local vegans noticed the lack of but interest in a daylong celebration of all things vegetable, grain and non-dairy. With help from the Alliance for Animals, Hannah West and Courtney Mayhew kicked off Mad City Vegan Fest that year, and it was a resounding success.Non-vegans may be surprised at the breadth and variety of vegetable-driven cuisine available in town. This year at the Goodman Community Center, food vendors include Chocolate Shoppe Ice Cream and Curry in the Box, with additional tables from Nessalla Kombucha, Bloom Bake Shop, Ian’s Pizza and lots more.Victoria Moran, author of “Main Street Vegan” and 10 other books, is a featured speaker at 2:30 p.m. Saturday. Chef Dino Sarma from Sacred Chow in Manhattan will do a cooking demo — ” Beans, Grains, & Veggies While Not Boring Yourself to Tears or Spending All Day” — with lemon quinoa, raw kale with chickpea dressing and daal Indian bean soup.Mad City Vegan FestSaturday, June 8, 10 a.m.-5 p.m.Goodman Community Center, 149 Waubesa St.veganfest.orgLindsay Christians covers Madison life for The Capital Times.

This video library features the best animal rights documentaries, short films and videos that can be found on the internet, all cataloged in one place for easy reference. Have you found a good film that should be in this library?

This fundraising event is part of the Worldwide Vegan Bake Sale. All proceeds for the Madison sale will benefit the Alliance For Animals. Drop by the Goodman Center and fill up with delicious vegan baked goods and help a good cause.

If you are interested in donating a bake good for the event please contact Lynn at lynn.afa@gmail.com.

It’s hard to believe how far vegan eating has come in such a short time. Not too long ago, the word vegan was unfamiliar to most people, and it was certainly not something easily pronounced (vay-gun?).

Times are changing indeed, and evidence that vegan eating has reached the mainstream is everywhere. Ten years ago, would you have ever even imagined people like Bill Clinton, Mike Tyson, and Michelle Pfeiffer talking about the benefits of choosing vegan foods? And look at the proliferation of dairy- and egg-free specialty companies, not to mention the recent (and hilarious) sketch featuring Justin Timberlake as a dancing block of tofu singing about the ethics and fun of vegan eating on Saturday Night Live.  See full article by clicking on the link below. . .

Google Confirms: Veganism on the Rise | Compassion Over Killing.

It’s a great time to be a vegan in Madison, especially for those who enjoy dining out. Local chefs and restaurateurs are making an effort to welcome vegans to their establishments by clearly identifying vegan choices on their menus and going beyond the ubiquitous hummus wrap to offer tasty, satisfying meals that also happen to include no meat, dairy products, eggs or other animal-derived ingredients.

In my experience, many Madison chefs will gladly create an off-menu meal for vegans or other patrons with special dietary needs. But here, I’ll focus on locally owned restaurants that have vegan choices on their everyday menus.  Read the full, delicious article here: Lucky vegans: Five divine dishes at Madison restaurants that are also animal-free – Isthmus | The Daily Page. 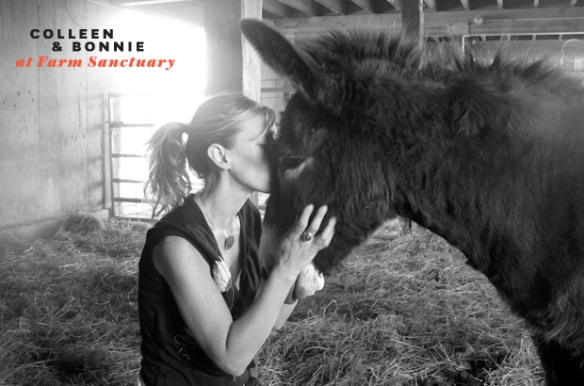 COLLEEN PATRICK-GOUDREAU is a powerhouse who needs little introduction. She is an animal advocate, chef, writer and speaker. In short, a doer. The author of six books , she regularly lectures around the country, inspiring others to think and act more compassionately. She is the creator of the 30-Day Vegan Challenge, an innovative program that has motivated many people to rethink and change their lifestyles. Her approach to advocacy is pretty straightforward. “My intention really is to take “veganism” out of the box and inspire people to recognize that it’s not some crazy, unfamiliar philosophy of living. It’s just common sense,” she says. We couldn’t agree more. Here, she brings us a one-of-a-kind recipe for a cake with aphrodisiac qualities— to spoil yourself or the one you love with (…did you know that cayenne pepper contains capsaicin, which raises endorphin levels?) And being the gold mine of information that Colleen is, we also couldn’t resist picking her brain for some food for thought. Read our insightful Q&A with Colleen, immediately following the recipe.