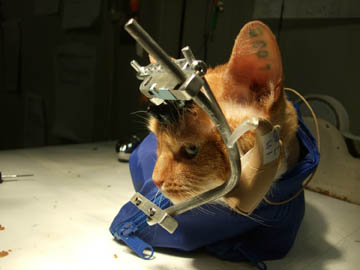 Regarding Saturday’s guest column, “Cat research, after all the drama,” by UW-Madison research director Eric Sandgren:

UW’s response to criticism about its barbaric taxpayer-funded experiments on cats has been to distort, deny and dismiss the well-documented cruelty and to silence dissent. But the truth is out.

According to records written in UW staff and faculty’s own hands, and captured with their own camera, cats at UW had their heads cut open, steel rods screwed to their skulls, electrodes implanted in their brains, and metal coils placed in their eyes. Some were deafened and had cochlear devices implanted into their ears. They suffered from infections and pain. That the government didn’t cite UW for this abuse speaks to weaknesses of animal protection laws, not morality or science.

This isn’t helping people. None of this laboratory’s cochlear implant experiments on cats has ever been published in a scientific journal. Records show some couldn’t even be completed because the mutilated cats became too sick and were killed.

UW’s approach to dealing with peoples’ objections has been to block emails from the public, to delete messages from its Facebook page, and to remove Board of Regents members’ contact information from its website.

Despite UW’s shenanigans, hundreds of thousands of people have protested. The photos that show why are available for all to see at PETA.org/DoubleTrouble.