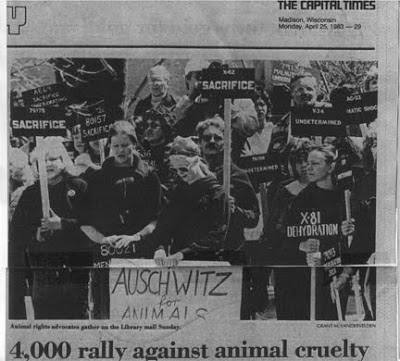 Don’t believe me? Read on to see media from the 1983 Mobilization for Animals Rally, which 3,500 – 4,000 people attended on the UW campus, and which happened concurrently with 18 other rallies at primate centers around the world.

It happened once, and we can make it happen again. People care about this issue. They just have to learn about it first.

Thank you to long-time volunteer Ann for bringing this to my attention and to former Alliance co-director Rick Bogle for providing additional documentation of the event. Rick’s Primate Freedom blog is the best chronicle of anti-vivisection efforts in Madison and beyond, and you can learn a lot from spending an afternoon there.

A speech given by Dr. Charles Magel, Professor of Philosophy, Moorhead State at the 1983 Mobilization for Animals Rally. On April 24, over 3500 people assembled at Library Mall on the campus of the University of Wisconsin in Madison.

This rare historical raw footage (some never before seen) was videotaped at the library mall. See the entire video here: http://youtu.be/3AI5o2E9rLo

Read the article that accompanies the startling photo above. Credit to Primate Freedom. My favorite part is this:

Dean Rowland drove 7% hours in a van from Bowling Green, Ohio, and brought his friendly white dog Shucka along. Rowland, who is active in animal rights activities, said he had heard about scientists who cut the vocal chords out of experimental animals to keep them from crying.

“If they want to test something for humans, test it on humans, that’s what I say,” Rowland said

People care about testing on primates, and with Kalin’s experiments, we have a renewed chance to bring that awareness to the public. Share the information with everyone you know, as well as actions to take to stop the experiments.

If you want to get involved with the Alliance’s anti-vivisection efforts, come learn more at the Volunteer Info Fest and Appreciation. Food will be provided by donations from Willy St Co-Op, Bunky’s, Brown Rice and Honey, and Ian’s. The raffle prize is a gift certificate from Kneaded Relief.