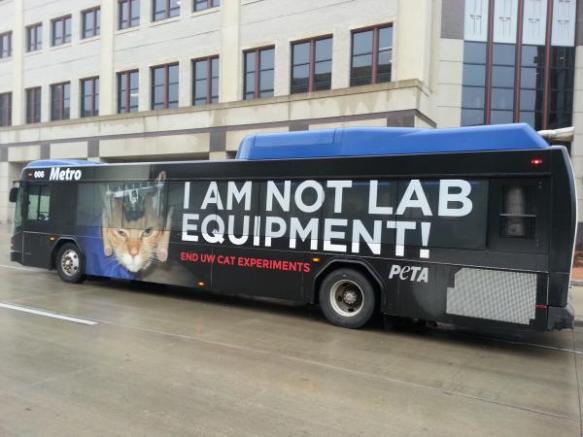 PETA has taken out over 100 new bus ads in Madison to decry the University of Wisconsin’s use of animals in laboratory research.

Many of the sides and backs of Madison Metro buses now feature a photo of a cat that was used in a science experiment on cochlear implants at the UW-Madison. The cat has a stainless steel bar and screws drilled into its head. The bus reads, “I am not lab equipment. End UW cat experiments!”

Mick Rusch of Madison Metro says he’s been receiving complaints about the ads. However, he says their policy prohibits only libelous, obscene and fraudulent advertising.

“Our buses are designated a public forum,” he says. “People have the right to voice their opinion and there’s just a lot of leeway to doing that.”

PETA’s Jeremy Beckham says the ad campaign is an effort to make the public aware of research that he says goes on in secret at UW.

“I think if people see this image, which is very shocking, they are going to upset,” says Beckham. “And I think that’s a very healthy reaction. I’m upset too. I just think that people who are upset should be contacting UW-Madison to discuss their concerns.”

A UW-Madison spokesperson didn’t want to comment on PETA’s bus ads, but the UW has vigorously defended its research in the past. In an email, UW confirmed the photo PETA used on the buses was taken four years ago from a pilot study at UW. They say two cats are currently used in research at UW that has helped improve cochlear implants for people with hearing loss.